Total Solar Eclipse: How to Plan

The Great American Solar Eclipse will happen in less than a week!  August 21st is almost here!

We at 36U have been finalizing our plans for driving to the path of totality—and are excited about seeing the famous corona at full eclipse. We’ve decided where to go and we’ve gotten our eclipse glasses, so now it’s time for final plans. 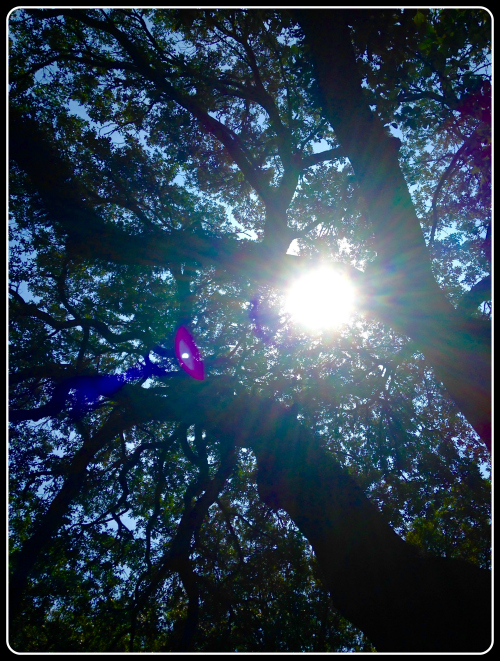 What About the Weather?

First, we’re coming up with how we will handle the weather. What if it’s a cloudy—or even a rainy—day? We’ll be watching the forecast for our chosen site (almost two hours from home in the middle of the path of totality in Tennessee). I’ve decided that I’m going there no matter the weather, because part of what I want to experience is the darkness in the middle of the day, and that will happen rain or shine.

You might feel it’s better to stay home and watch live streaming or on television if a cloudy, rainy day is forecast. NASA will live stream in several different mediums. If you’re driving to the path of totality and can reach several different places, you might also change your destination based on a better forecast in another area.

But be aware that the prediction is for heavy traffic all around the path of totality throughout the U.S. One source estimates that over 7 million people will visit the path of totality. It’s likely that roads near the path will be very busy, and towns near interstates will perhaps be the most full. Some towns are charging $50 for a parking spot for viewing – and are almost sold out now.

Don’t wait any longer to make your plans!

The best strategy on eclipse day is to leave early and have plenty of extra time for reaching your destination. You don’t want your eclipse experience to be spent in the middle of a traffic jam!

Since you’re planning for about three hours of eclipse time from beginning to end, take plenty of water or soft drinks, as well as plenty of snacks. The total eclipse near us is around lunch time, so we’re taking a picnic. We found a church that is letting us watch from its parking lot. We found it through an internet search of churches in an area not near the interstates. A phone call was all it took to get permission to view the eclipse from the parking lot. We will make a donation to that church, because we know many places have made the eclipse a money maker, and we appreciate the willingness to let us watch from church property.

Don’t Rely on Your Cell Phone

We have our eclipse glasses ready and will be printing or sending directions to our phone. Predictions are that cell towers may be overwhelmed with so many people communicating and using social media during the eclipse, so we’re making sure to have all of the information we need in case we don’t have to access the internet or map services. We will also take chairs and a big umbrella for shade so we’ll be comfortable for the three or more hours outside. 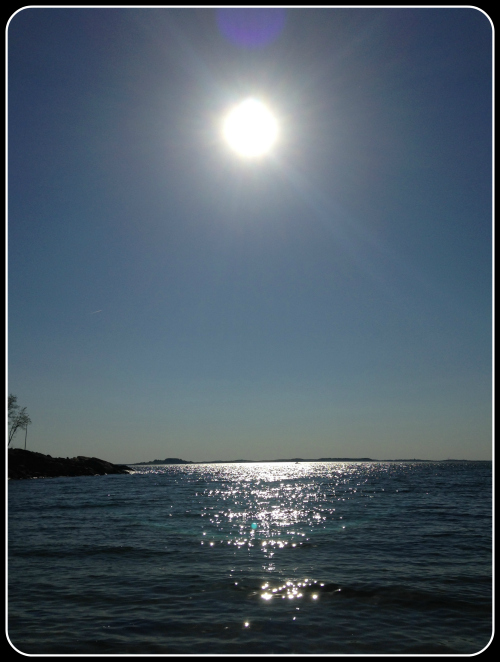 And, finally, sunscreen is a high priority because we’re hoping for a clear, sunny day to see what is a once-in-a-lifetime experience for most people!

We hope you have a good solar eclipse viewing experience, whether it’s in-person in the path of totality or online or on TV. Seeing the corona in a photo or video is pretty spectacular—and in person is that much better! 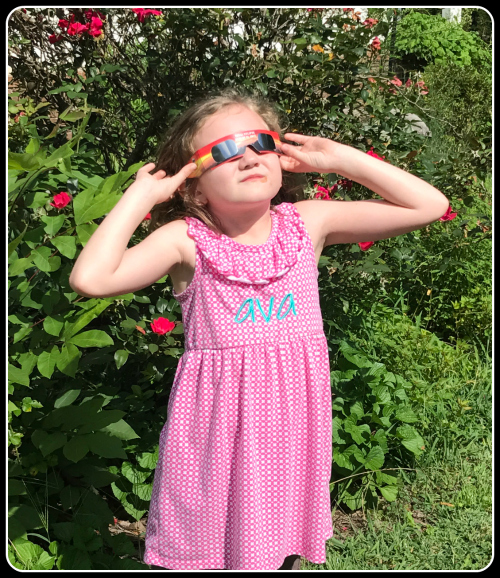 Total Solar Eclipse: What Do I Need?

The Great American Solar Eclipse is less than two weeks away!

Monday, August 21st will be here soon. If you’re in the path of totality (as we explained in our last blog post) or near it, it’s time to start thinking about what you need for your best eclipse viewing experience. 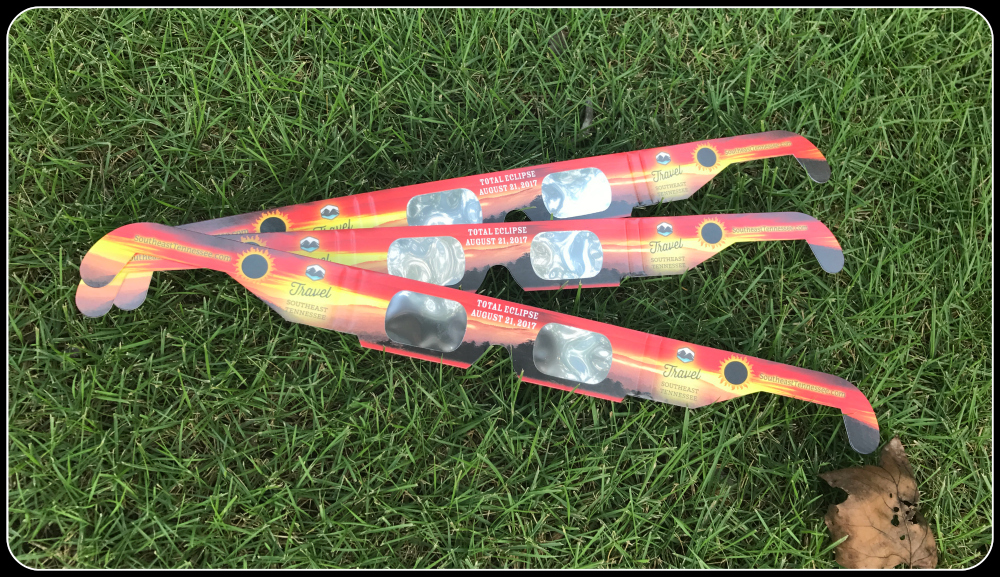 You probably already know you’re not supposed to look directly at the full or partially-eclipsed sun with the naked eye. So that you can watch the eclipse as it progresses, get eclipse-viewing glasses with NASA-recommended ISO 12312-2. Regular sunglasses are NOT safe for eclipse viewing. NASA has specific tips here to help you be safe while enjoying your eclipse viewing.

Of course, you might find some eclipse glasses that don’t seem to meet the ISO standard. The Washington Post, in this article, sums up the test to see if yours are okay: “When you look through them, you shouldn’t be able to see anything but the sun. Not the lights in your house, not the headlights on the street. Nothing but the sun.”

This same article goes on to list places carrying eclipse glasses. You can find them at retail stores such as Lowe’s, Walmart, Toys “R” Us, and Kroger, as well as convenience stores such as 7-Eleven, Circle K, Love’s Travel Stops, and Pilot/Flying J. A more comprehensive list is in the article. Some public libraries and other public organizations have free eclipse glasses, so it’s worth an internet search to see if any place near you is giving them away. 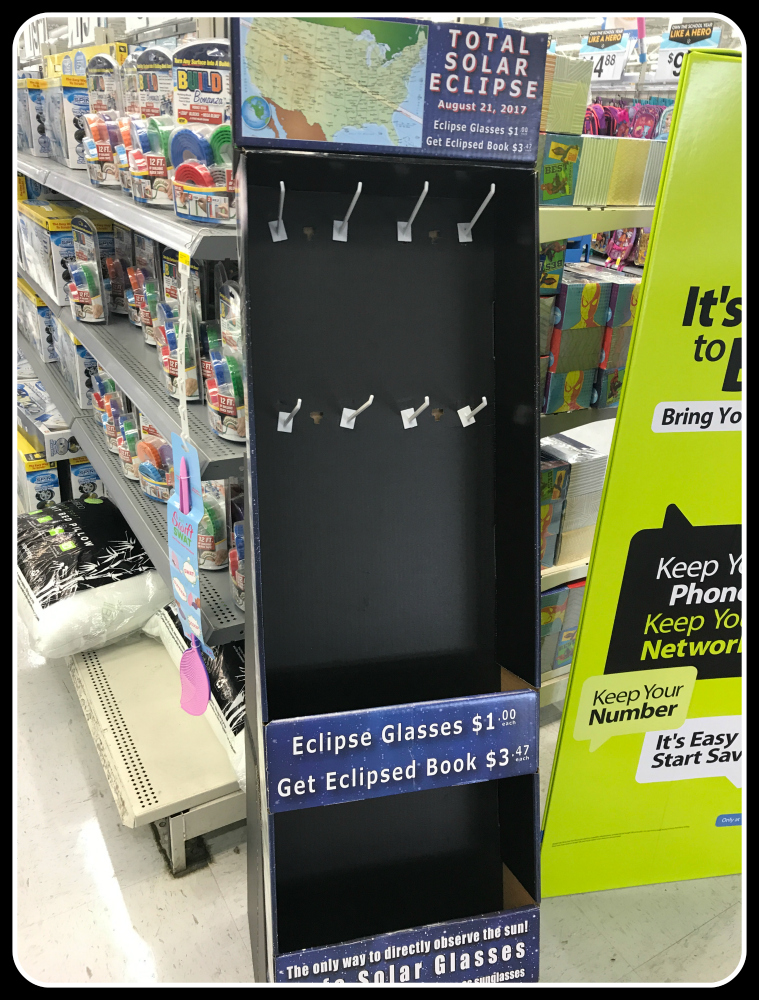 We at 36U have found it’s too late to order online and receive delivery by the eclipse date, so your best bet now is to find a free source locally or go to a local store. We even found empty eclipse glasses displays locally. So you may have to go on a hunt (as we did) to find your glasses before the 21st!

We know a lot of you will want to try some photos of the eclipse on your phone. Here’s some advice from Mr. Eclipse on how to do that.

If you want to try an “old school” DIY viewing method, there’s always the pinhole viewer. National Geographic gives an easy version: “Make a simpler version of the solar eclipse viewer with two thin but stiff pieces of white cardboard. Punch a small, clean pinhole in one piece of cardboard and let the sunlight fall through that hole onto the second piece of cardboard, which serves as a screen, held below it. An inverted image of the sun is formed. To make the image larger, move the screen farther from the pinhole. To make the image brighter, move the screen closer to the pinhole. Do not make the pinhole wide or you will only have a shaft of sunlight rather than an image of the crescent sun. Remember, this instrument is used with your back to the sun. The sunlight passes over your shoulder, through the pinhole, and forms an image on the cardboard screen beneath it. Do not look through the pinhole at the sun.”

Finally, don’t forget plenty of water and sunscreen and whatever you need to entertain yourself during the two-and-a-half to around three hours that it will take for the eclipse to run its whole course from beginning to end. 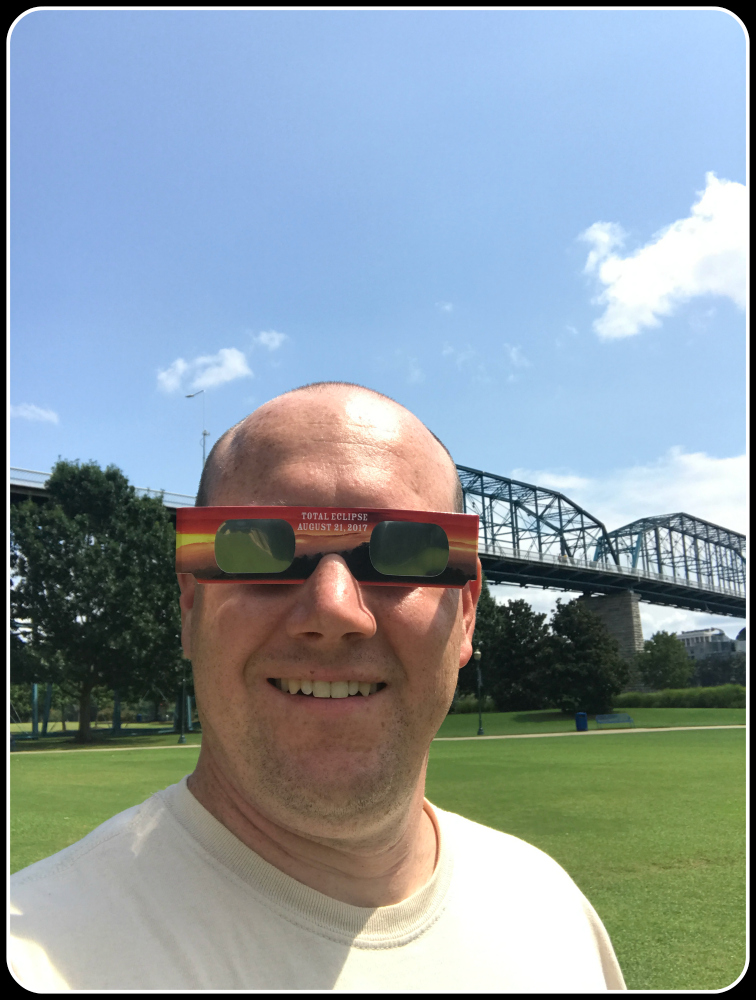 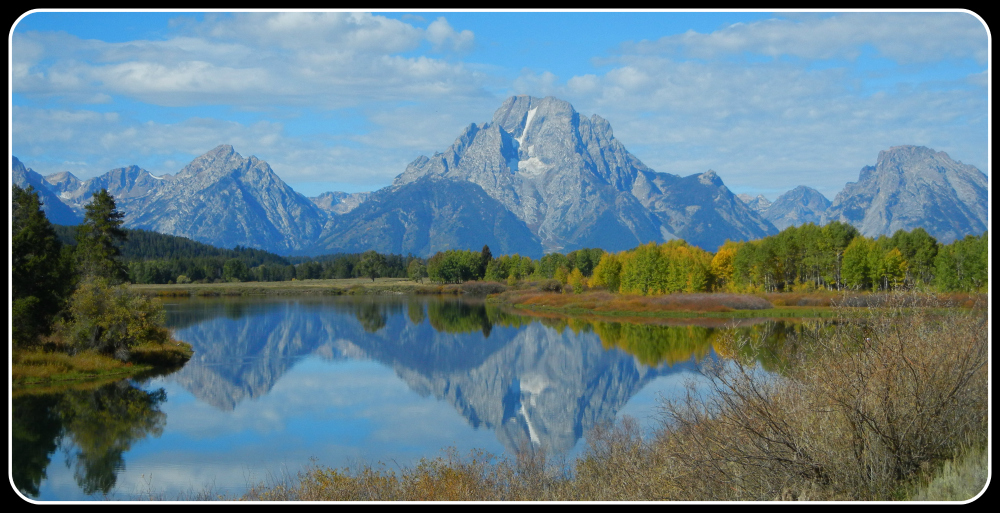 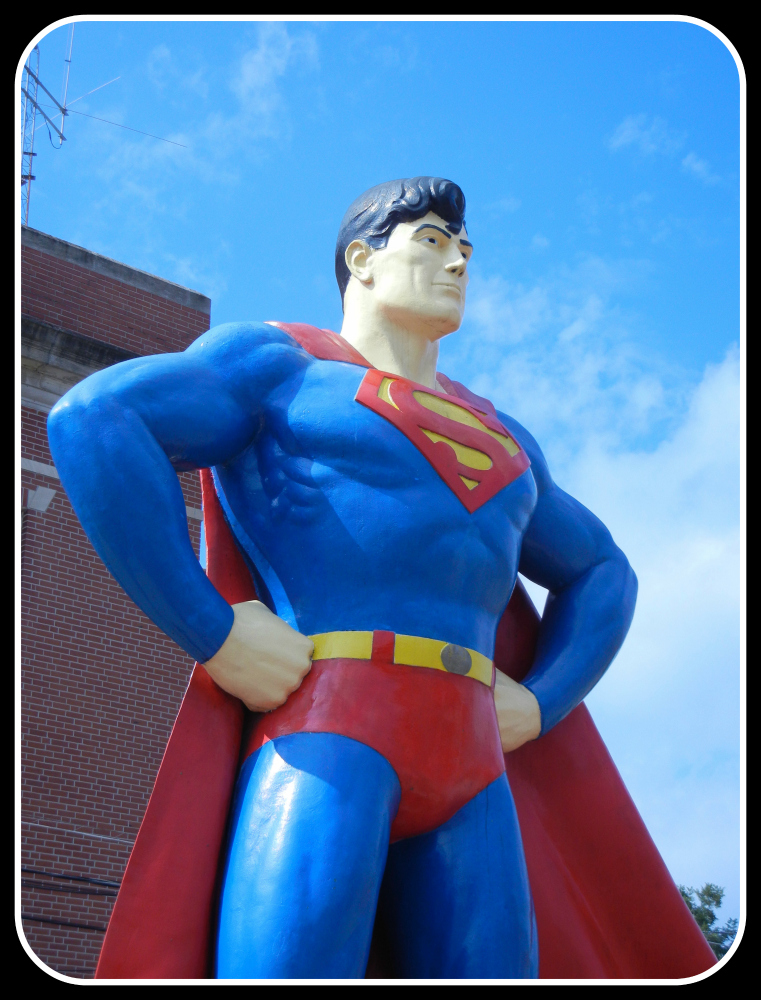 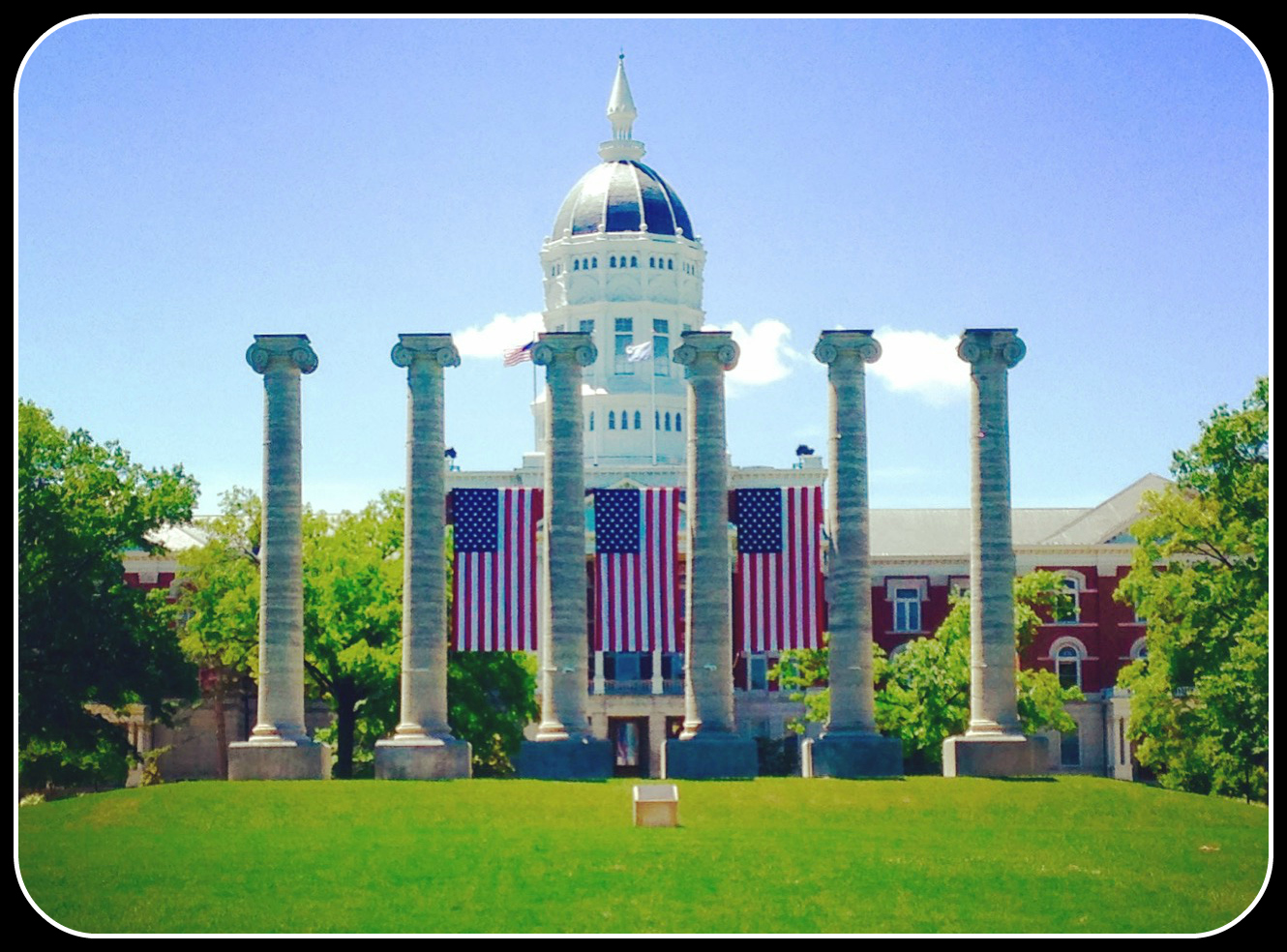 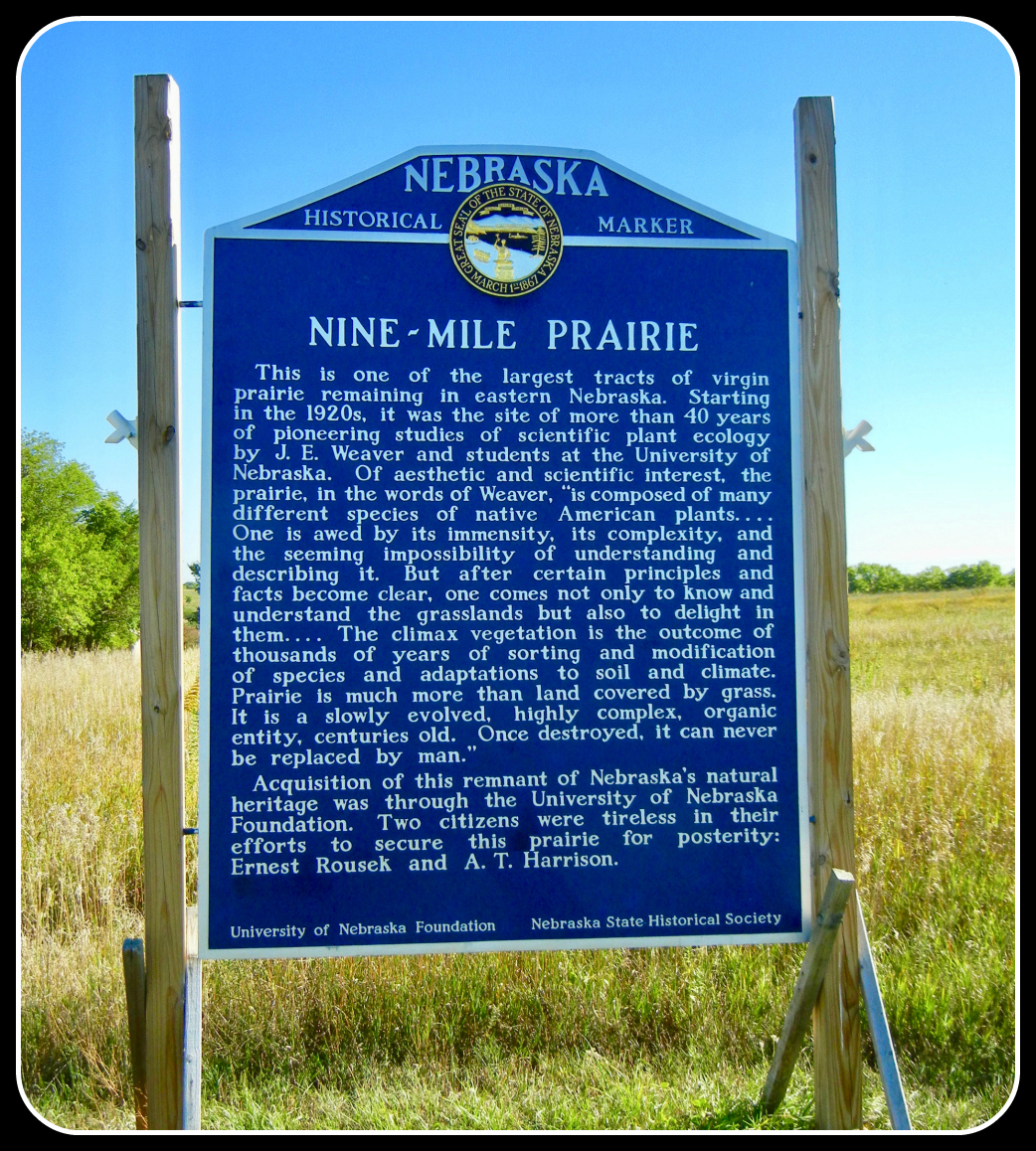